ROME: CITY OF MARBLE is finally starting to make its way into distribution. I got an update this evening from a friend on Facebook who has received his pre-ordered copy. Huzzah!

With ROME: CITY OF MARBLE safely under way, I’ve turned my attention once again to my other game set in Ancient Rome, LXIX: THE YEAR OF FOUR EMPERORS.

I sent a prototype of LXIX home to Germany with a well-respected publisher after The Gathering in April, and he just requested my most recent update of the rules for an upcoming game con he’ll be play testing it at. I’m terrible about keeping my rules up to date, so this meant a couple of late nights this week feverishly re-writing my existing rules set with months worth of changes and updates. Totally worth the self-induced stress and sleep deprivation, though. LXIX is in the best shape it’s ever been, and I’m confident it’ll catch someone’s attention soon.

BoardGameGeekTV has released their preview video of ROME: CITY OF MARBLE from Spiel 2015. It should be hitting FLGS shelves in the states in a week or two!

For the curious and those of you eagerly waiting, the rules for ROME: CITY OF MARBLE have been posted in the files section of the game page on BoardgameGeek in German, French, Dutch and English. 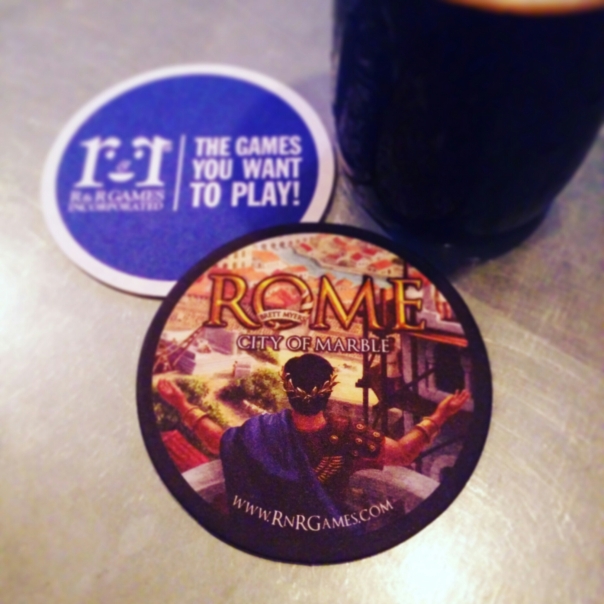 Last night at Madison Board Games & Beer, the open-to-the-public board game night I organize, my game designer pal Kane Klenko gave me a handful of these ROME: CITY OF MARBLE beer coasters be brought back from the R&R Games booth at Gen Con. They look awesome!

Cannot wait to play this. https://t.co/fEKJ8Ttg8I

And an official press release from ACD Distribution:

From ACD Newsline: New from R & R Games! GobbleStones, Rome: City of Marble and Mombasa! http://t.co/VKB5TY3DIb Check it out!

Welcome to ancient Rome! In this tile-laying game, you are a builder backed by one of the powerful Patrician families of Rome.

Influence and direct new construction of the expanding metropolis through shrewd development of the city’s districts. Construct various civic buildings: Temples for worship, Baths  for health, Theaters and Arenas for arts and entertainment. The more you build, the more you gain Imperium, the measure of real power and influence in Roman society.

The player with the most victory points in the end earns the title of Architectus Romanus!