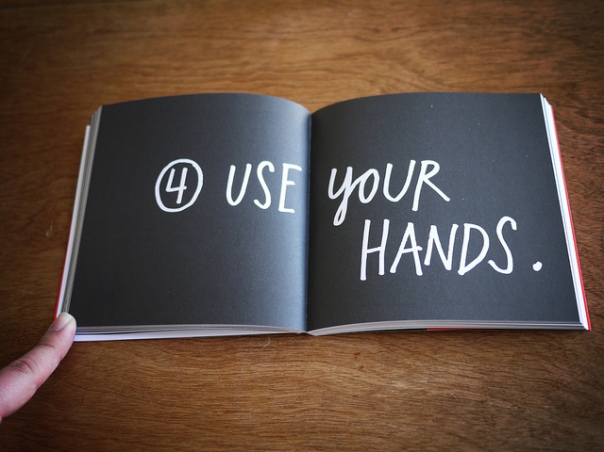 I’m reading Austin Kleon’s smart, charming manifesto Steal Like an Artist, and the last line in the Chapter 4 really resonated for me:

When you start to lose steam, head back to the analog station and play.

So I went back and re-read that chapter and found something pretty cool.

He says in Chapter 2, “Don’t wait until you know who you are to get started.”

I’d like to propose Steal Like an Artist as a set of rules for a Transformative Game, one where the goal is to find, nurture and grow your creative self.

In Chapter 4, Use Your Hands, Kleon describes a creative process that I think is meaningful, and which should be familiar to advocates of playful learning.

He separates his creative process into “analog” and “digital” parts, going so far as to maintain separate workstations. His analog desk holds markers, pens and paper, index cards and newspaper, any sort of physical material he can use to create, but nothing electronic.

It wasn’t until I started bringing analog tools back into my process that making things became fun again and my work started to improve.

He writes about his experience creating his first book, Newspaper Blackout, a book of poems written by blacking out everything but select words and letters in newspaper articles:

“For my first book, Newspaper Blackout, I tried to make the process as hands-on as possible. Every poem in that book was made with a newspaper article and a permanent marker. The process engaged most of my senses: the feel of the newsprint in my hands, the sight of the words disappearing under my lines, the faint squeak of the marker tip, the smell of the marker fumes–there was a kind of magic happening. When I was making the poems, it didn’t feel like work. It felt like play.”

He goes on to describe the process of laying out the book, once the poems were complete:

“When it came time to sequence Newspaper Blackout, I scanned all the pieces into the computer and printed them out on little quarter sheets of paper. Then I pushed the sheets of paper all over my office, rearranging them into piles, and then a stack, the order of which I copied back into the computer. That’s how the book was made–hands first, then computer, then hands, then computer. A kind of analog-to-digital loop.

When I read through this a second time, it struck me: this is the play, information, and reflection cycle of Meaningful Gamification and Transformative Play that Scott Nicholson has been developing and writing about at Because Play Matters game lab and elsewhere.

“When you get back to your analog station, pretend it’s craft time. Scribble on paper, cut it up, and tape the pieces back together. Stand up while you’re working. Pin things on the walls and look for patterns. Spread things around your space and sort through them.

Once you start getting your ideas, then you can move over to your digital station and use the computer to help you execute and publish them. When you start to lose steam, head back to the analog station and play.”

Play, Information and Reflection. Repeat as needed. Unlock your creative self.

Steal Like an Artist contains vital advice for any creative, but I think many of the lessons are especially useful, directly or indirectly, for game designers.

Creative guy Austin Kleon touched a nerve with a smart, subversive post that reminds us we could be doing something we love instead of wasting time on our mobile devices.

Reading books makes me happy. Being on my phone makes me miserable. So, I made a wallpaper for my iPhone’s lock screen to remind me that I have a choice.

My pal John Kovalic picked up the idea and ran with it on DorkTower, with a decidedly more proactive, writerly bent.

I liked John’s encouraging, productive take on it and decided to make a wallpaper suitable for a game designer’s iPad. I’m not a graphic designer, but I like how it turned out.

If you use it, send me a screenshot or selfie and I’ll post it here.

With thanks (and apologies) to Austin Kleon and John Kovalic.